Earlier this month, Taylor County High School in Campbellsville, KY, performed my play, A Family Reunion to Die For, at Campbellsville University. I came across a nice article about the production in the Central Kentucky News Journal. The article mentions that several rehearsals were cancelled due to snow. I hope they had a successful run and that the snowed out rehearsals didn’t cause too much trouble. (Last year, I directed a school play here in Central Jersey, and Hurricane Sandy wiped out a week of rehearsals, so I feel the director’s pain!) 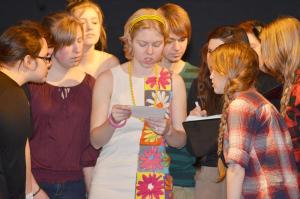 A Family Reunion to Die For – Taylor County High School

Break a leg to Limelight Productions as they produce my play, A Family Reunion to Die For. The production runs March 21 to 30, at Paine’s Restaurant in Hollister, CA.

Break a leg to everyone involved in Starbuck United Church Players production of my play, A Family Reunion to Die For, this weekend. This will be the theatre company’s farewell performance after 25 years of entertaining in Manitoba, Canada.

A Family Reunion to Die For – Starbuck United Church Players

Break a leg to everyone involved in the production of my play, A Family Reunion to Die For, this weekend at St. Joseph Academy Catholic High School in St. Augustine, FL.

I’ve written another article for Pioneer Drama Service, (publisher of my plays A Family Reunion to Die For and Murderous Night at the Museum.) My article in this week’s newsletter is about costuming a show on a tight budget. Don’t forget to subscribe to the newsletter for articles written by a variety of theatre professionals.

The full text of the article is below:

You’ve just signed on as costumer for a play, and you can’t wait to wow audiences with your ideas. Each performer requires at least one — if not half a dozen — costumes, and you plan to ensure that every actor will look good. Making sure the costumes fit well would be easy if you could hire a team of tailors to create your intricate designs from scratch. But with school and community theatre budgets, that’s never an option. Instead, you fear you’ll spend the rehearsal process tearing out your hair as you attempt to keep the performers clothed, because even renting costumes from a theatrical costume supplier would break your small bank.

Well, fear not. Stretching costume dollars is easier than you think. Take a look at these tips and tricks you can use to costume a play on even the tiniest of budgets.

…And now that you’ve discovered some ways to save a few dollars costuming this play, don’t forget the most important trick to save money for the next…